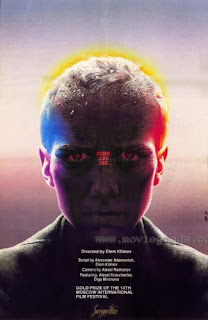 The story of a young Belorussian farm boy who leaves his home to what he expects to be pride and glory fighting with the partisans during the German invasion of WWII.  To this point it is very much like an earlier Russian film that I saw and reviewed. Larisa Sheptko's "Ascent" from 1976, a very impressive study of the lengths a people of an occupied area will go to survive. "The Ascent" is not to be missed and may actually be a companion piece that may get you up to speed on the history of the time and area, but it can not fully prepare you for the depth and brutal portrayals of Elem Klimov's "Come And See". Upon initially seeing the boy, played by Aleksi Kravchenko the awkward lad seems to just float on a cloud.  When he finally is impacted by the war his whole life becomes a walk through hell with each level more atrocious then the last.  By the end of the movie, the look in the eyes of the boy reflects the sheer terror that they have seen and his posture shows the burden that his body has come to bear.
I cannot say enough about this movie. It's imagery will stay with me for a very long time.  While I highly recommend it, I also must warn that it is not for the timid or squemish.  I have seen many, many war/anti-war movies in my life but none in any language has been as effective as this one.
Posted by Ken Loar at 8:12 PM 4 comments:

"This film is dedicated to all the Brothers and Sisters who have had enough of the Man".

Melvin Van Peebles' Sweetback, is on the run.  When he witnesses the brutal beating of a black revolutionary by (do I even need to say) WHITE cops, Sweetback administers a little street justice.  Since the beating of (do I still need to say) WHITE cops is not something that the Man takes lightly, Sweetback is forced to take it on the lam, heading for Mexico.  The way is not easy and he is forced to deal with hardship (police as incompetant as they are racist and biker gangs looking for good times)as he makes a dash for the border.

With today's culture, where The Man may be a little harder to identify (I guess that depends greatly on who you are and where you live since I am sure there are those today with whom the movie still resonates), I was a little disturbed by the open portrayal of stereotypes that I have spent years rejecting.

This was an interesting look at what could have been the Godfather of Blaxploitation films. Though often seeming stiff and roughly cut, it seems that the feeling had been edited for a deliberate artistic feel.  The use of montages and spliced repetitive dialogue, while noticable is almost subliminal in it's affects.
"Sweet Sweetback's Baadasssss Song" is a certainly worthy of it's place in The Book, although I might argue that being there, it over-shadows the other genre films of the time.  "Shaft" and "Superfly" making them easily removable.
Posted by Ken Loar at 6:57 AM 3 comments: