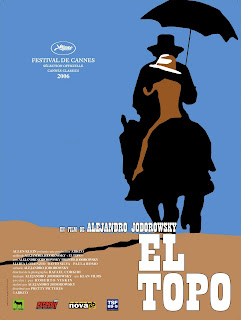 Take a Sergio Leone western, add a dash of Luis Bunuel's surrealism, a bit of Fritz Lang's "Metropolis", a sprinkle of Tod Browning's "Freaks"  and you've got an idea what to expect from Alejandro Jodorowsky's "El Topo". With a title that literally means "The Mole" my first question was why would they pick a name such as this for the title character.  Is the mole a ferociously identified icon of Spain?  That is not the answer but don't worry, it will come as the movie reaches the half-way mark.
The first half of the movie plays out like a textbook Spaghetti Western, with odd, bad guys and good guys that aren't really all that good, they are just not as bad as the bad guys.  Beginning with Alejandro Jodorowsky in the title role riding through a desert with his naked son(except for the hat that I suppose is supposed to shield his eyes from the harmful effects of the sun) it was reminiscent for me of the "Lone Wolf and Cub" samurai series that hit comics and film in the late 80s and early 90s, but unfortunately loyalty and parental duties are not high on the list virtues for "The Mole", who leaves his son with a group of monks when a woman comes along.  But when the title character is introduced to a subterranean society, it takes an almost science-fictionesque turn, as he sheds his guns and black gunslinger garb (hmmm, now I'm beginning to wonder if this may have been somewhat influential to Stephen King for his "Dark Tower/Gunslinger series) in favor of a monkish robe, performing carnival acts for the above ground towns people (notice that I did not refer to them as normal), using his income to finance the tunnelling that he hopes will free the subterraneans.

While I am glad to have seen this particular movie, it falls more in line with a guilty pleasure cult film than a MUST SEE MOVIE.
Posted by Ken Loar at 7:34 AM 2 comments: