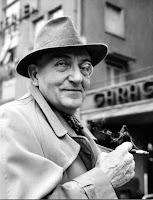 Fritz Lang's film making career began in post war (WWI) Germany.  As with many of the films coming from there at the time, his early expressionism was unique to the film industry.

Dr Mabuse, Der Spieler a.k.a. The Gambler (1922) Part Fu Manchu part Moriarity, Dr Mabuse will do what is necessary to get a more scratch.  The criminal mastermind began his long career in movies in this film.  The diabolical doctor seems to have control over time as well, since it really seems to stand still getting through this one. Interesting enough if taken in small bites but I have been hard pressed to make it through in one sitting.

Metropolis (1927) This is probably Lang at his greatest.  A story about class, station and the respect for the parts that make the whole.  Even the lowest most insignificant piece, when stressed can break and shut down the machine. 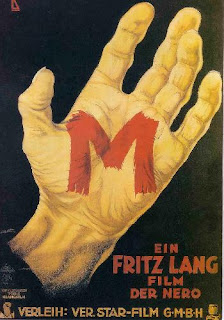 M.  (1931) This one practically invented the film noir movement.  Peter Lorre wrote the book on creepy.  When the police are unable to stop a serial child murderer, the job falls to the criminal underworld.  Every eye and ear on the street is on the lookout and dispenses justice without a long drawn out court process.

Notable exceptions "Der Mude Tod" a.k.a. "Destiny" and "Die Nibelungen" a 2 parter  telling the saga of Seigfried and "Woman on the Moon" if only to see how space travel might have been anticipated.  The spaceship's dormitory sized rooms get a laugh out of me every time.
Posted by Ken Loar at 6:39 AM