The Ascent (1976) or "Восхождение" if you are actually Russian. 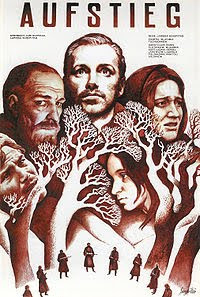 "The Ascent" tells the story of a Soviet Union occupied by Germany during WWII.  Directed by Larisa Sheptiko and released in 1976, this film illustrates the lengths those affected by war will go to for survival.  Filmed in black and white, I was immediately sympathetic as the subjects were partisans, part of a civilian army fighting for their own lives much more than for their party, they fight for their country and their way of life.  Lately I have been interested in seeing films that portray the acceptance of the conquered for the conqueror, as seen in Melville's "Army of Shadows" as well as 2006's "The Lives of Others".

As two partisans attempt to find food for their group, they encounter fellow Russians, some who have accepted their occupation and German troops.  Though they work together to fight off their enemies (German Soldiers AND the brutal Russian winter) they are eventually captured and interrogated by Russian Liaison to the occupying force.

Sheptiko's film is a great film worthy of a place in "The Book".