I applied to my local public library to see if they could get this one for me and they were able to borrow it (in VHS format from the library at Cornell University, how cool is that?


First, let me start by saying, considering the title, Madame Beudet didn't do a whole lot of smiling.  In fact she seemed quite unhappy.  Her husband shows her no respect and can actually be seen removing a gun from his desk, where he keeps it unloaded, and threatens to kill himself to stop his argument.  Madame Beudet, seems to feel that her loveless marriage may be best ended by placing bullets in the gun.  But when the next argument begins that jerkwad of a husband turns the tables and points it at her.  Recognizing the fact that the story and technology available to Madam Dulac was primitive, I was quite impressed by the story and technics used. 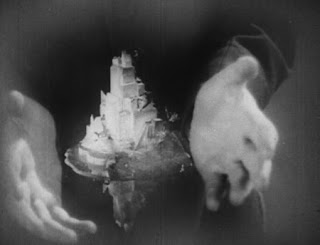 The VHS borrowed also had a short surreal film titled "La Coquille et le clergyman" ("The Seashell and The Clergyman") which was a delightful short film.  Released in 1928, it may have been overshadowed by "Bunuel's "Un Chien Andalou" or may have even provided some inspiration.

This quote stolen from Wikipedia says it all for me:

The British Board of Film Censors famously reported that the film was "Apparently meaningless" but "If there is a meaning, it is doubtless objectionable"

Certainly, any one of these films deserves a place in "The Book"